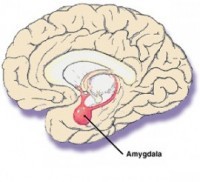 I was delivering a speech in University of Athens, Athens, Greece. I was describing that amygdala is the size of an almond in our brain. Someone in the audience said amygdala actually means almond in Greek. My amygdala grasped that lasting positive emotional memory that day. How? Let me tell you in a nutshell what amygdala does in human brain.

Amygdala consists of many groups of neurons (nuclei) called amygdaloid complex. All the messages generally enter through the lateral nucleus and go through many other nuclei called basal, basal accessory and medial nuclei, before exiting through central nucleus of the amygdala to all the brain structures.

Emotions are processed at the level of amygdala to generate reaction to positive or negative perceptions. While it is known for the flight and fight reaction when faced with fear with central nucleus playing an important part, there are several parts of the amygdala that generate rage reaction or calmness on stimulation. This is the structure that processes all emotions such as anger, fear, jealousy, and pleasure.

This organ is also responsible for emotional memory- remembering the emotion associated with a certain event (such as my almond story in Athens). That said, interestingly, events associated with negative emotions are remembered better than those associated with positive emotions. No wonder we hang on to painful memories. Hippocampus that hold our long term memories is closely connected to amygdala.

Also, it is important to remember that cognitive abilities such as attention are affected by the amygdala. This is due to amygdala’s connections to the cognitive brain regions or through the emotions impacting thinking.

Amygdala is connected to several regions of the front part of the brain that act as CEOs of emotional and cognitive processing. It is thought that if those CEOs are malfunctioning (top-down) or if the amygdala is not effective (bottom-up), there could be a problem in controlling anger and anxiety, and may also impair attention. This makes me think man-made labels of emotional disorders do not fit into neat labels as so many things can be affected at the same time.

What is fascinating is that if one perceives any emotional stimulus for less than 40 milli seconds, emotions that are processed at the amygdala will not reach the CEO in the prefrontal cortex, and you see just the amygdala becoming overactive without supervision. This could be akin to knee jerk reactions without reflection or amygdala hijack!