Thinking and Feeling Circuits in the Brain are Interconnected: Managing Filters 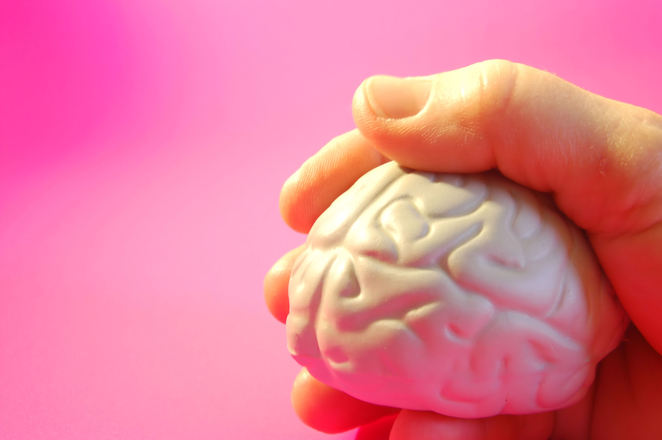 To be super precise, it is more like how each brain region primarily responsible for either the thinking or the feeling in fact do both the thinking and feeling functions themselves (intrinsic)- AND are connected with each other (directly and indirectly). The reason why you want to know this is to grasp how perpetually our thinking is influenced by emotions and vice-versa. This offers a basic idea of how our mind functions and how we raise or lower our filters in expressing our thoughts and feelings!

But they are all interconnected everywhere- in the front (prefrontal and anterior), middle (intermediary and also anterior) and back (posterior) sections of the cortex and the lower section of the brain i.e., below the cortex (subcortical).

Another fascinating thing is there are direct connections between several of the important thinking and feeling centers (a straight connection between the two) and also the indirect connections between them like a railway track connecting all the stations serially. It ends up being like several railway tracks with common stations across these multiple tracks. To use the analogy of railway tracks, there are some brain regions that serve as grand central station where connections are strong and with several other regions, direct or indirect! I hope you are still following me.

Now I will tell you about each section of the brain introducing the name of the brain region and its key function till you get a more fuller picture (though basic understanding) of brain operations of thinking and feeling as we slowly build the big picture.

(1) The problem solving and thinking headquarters is the dorsolateral prefrontal cortex (DLPFC) (According to the article published in the Nature with the lead author Dr. Glasser  today that updated the NIH brain mapping project’s new findings,  nearly a dozen specialized DLPFC subregions were revealed that potentially serve a multitude of cognitive functions such as planning, working memory and abstract thinking). The emotion control region is the ventrolateral prefrontal cortex (VLPFC). Headquarters of emotional thinking is the medial prefrontal cortex (MPFC). All three regions are directly and indirectly (via one-another) connected at the front end to communicate. To add further clarity, DLPFC also controls emotion through its ability to decide/think what to do, such as executive function of modulating emotions along with the VLPFC that modulates the intensity of emotions. In other words, more than one higher cortical region participates in emotion modulation through weighing in from many angles. 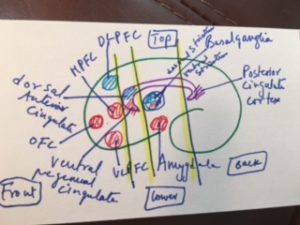 (2) The anterior cingulate cortex (ACC) is the intermediary cortex (middle manager) that is still part of the prefrontal cortex, but more towards the back edge of the brain’s frontal cortex. It has top part called dorsal ACC that is directly connected to the DLPFC and helps in attention and error correction while thinking, making decisions while working on tasks. The lower or ventral part of the ACC is called either the ventral ACC or pregenual ACC that is involved in emotion processing. It is next in line to both the VLPFC and the MPFC in the pecking order of their respective emotional processing functions. The fun part is the dorsal ACC and ventral ACC are both closely connected.

(3) Then, the back part of the brain has the posterior cingulate cortex (PCC). The region itself has the combined attentional and emotion processing abilities and is a hub for the both, pulling it all together, again directly and indirectly connected to ACC and the PFC regions.

(4) Now come the two key subcortical regions, the basal ganglia and the amygdala.

(4.a) Basal ganglia have so many parts, and more known for cognitive functions. The top part within the basal ganglia includes dorsal striatum that is connected to the dorsal ACC and the DLPFC (interesting that you pick up the word dorsal for all the top parts of the PFC, ACC and the striatum).  This dorsal striatum is so important for learning, impulse control and concentration, working as a team with the PFC, ACC and the PCC in addition to several other regions. Ventral part of the basal ganglia includes the ventral striatum. It is closely connected to the VLPFC, MPFC and also the orbitofrontal cortex. It is involved in emotion processing, and reward anticipation and response (a.k.a motivation). Know that there are intrinsic connections i.e., connections within the basal ganglia between the dorsal and ventral striatum.

(4.b) Now coming to the amygdala– it is ventral to, or below the basal ganglia and is predominantly known for emotion processing and reactivity.  It has dual functions like many regions and has a key role in cognitive functions that involve concentration and emotional memory. Again there are intrinsic connections within the amygdala and is directly and indirectly connected to PFC regions, ACC, PCC and the basal ganglia.

Filters and Managing Filters: What is fascinating now to grasp is: while you get excited at level of the amygdala, and likely to react or blurt out your excitement, the PFC regions will place filters. That is, IF you use your PFC. The efficiency of the filter management is enhanced by the combined cortical network between the hubs such as the PFC, the ACC and the PCC (and many more).  You now understand that the executive function of emotion modulation is exercised by the filters. If you do not trust anyone or too private, your filters go up. You ask yourself what is the middle ground!

Also remember that it is harder to place filters on the negative emotions and negative thinking compared to the happy, and neutral in that order. It is because, we are primitively inclined to protect ourselves and therefore, our amygdala (old brain) and the ACC (intermediary brain) are prone to operate that way. We as humans, have developed extra layers of modern (neo) cortex optimizing our expressions of thinking and feeling.

All the literature from rat and monkey studies of love and neglect with emotional impact, mindfulness therapy through conscious awareness, serotonin and dopamine’s role in happiness, domain functions of emotion processing, impulse control, reward and executive function,  or reducing threat and increasing safety through corrective emotional experience in therapy make absolute sense if you understand these underlying brain operations. There are multiple angles explaining how the chorus of brain functions comes together!

ps. Disclaimer: If I use references, you would hate reading as there are literally hundreds of them, but ask me if you need these. Happy to help. Every sentence is developed/tested over the years through countless multiple scientists’ discoveries. I wrote this piece today from my current view on this matter. I intentionally reduced some detail to simplify.

©2021 KLEO Template a premium and multipurpose theme from Seventh Queen