Reward and Emotion Circuits are Linked in the Brain: A Hot Mess If Things Go Wrong 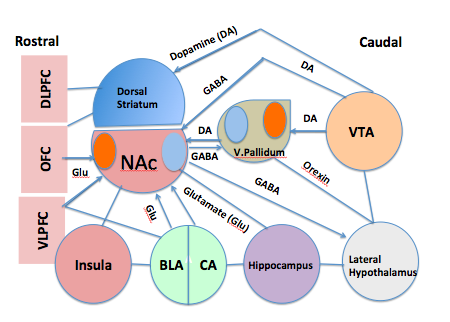 I bet you know at least one person who has mood problems and use mind altering substances at a heavy rate. The concept of drug use is shifting like a line in the sand with the boundaries being stretched by social perceptions with legalization of marijuana for specific indications or in certain places in the USA. What escapes many is it is not as simple as assessing harmful effects or safety here and now. I will attempt to explain how the brain networks underlying the emotion modulation and the reward seeking are so closely linked and they can have lasting effects. No wonder mood and substance abuse problems often impact and coexist side by side, camouflaging one another.

Besides this, I have two more existential reasons to urgently think about this. First, it is not so much as substances, but it is about any reward that kids are after, and pester their parents to buy-buy-buy- be it Mac Donald’s or a toy-collector item or video games. Such urgent need to have things assumes obsessive proportions that parents tell me their children have obsessive-compulsive disorder (OCD). This is really not OCD, but seeking reward, liking it and wanting it badly and straight away. They are intense kids. Second, the teenagers, especially those with mood disorders, look at me like I lost my mind or like I am an ossified, conservative, rigid old adult when I talk of negative consequences of Marijuana with the hope of dissuading them. Parents of children and teenagers may benefit from knowing the underlying brain mechanisms.

Reward circuit, simplified. As you see in my hand written diagram here, nucleus accumbens is the small region below the cortex of the brain that is responsible for seeking and searching for the reward and getting excited about the reward- anticipating it, and also the region that says “I like it” and also “I want it.” This nucleus accumbens connects to the prefrontal cortex called orbitofrontal cortex (OFC) that evaluates and makes the decision to get or not get the reward after it hears from the nucleus accumbens. So now you know the two key regions regions- nucleus accumbens and the OFC. Dopamine is sent to nucleus accumbens that is behind seeking motivation. If all is well, this chemical is in right proportion. If it is too much or too less, there are problems with reward seeking. 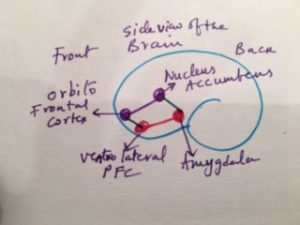 Emotion circuit and its influence on reward circuit, simplified. We talked about the amygdala so many times before. This is one of the key regions that sends glutamate another excitatory chemical to the nucleus accumbens and is responsible for getting us excited about wanting the reward. In other words, amygdala is sending the message “I want it, I want it.” Amygdala, especially if it is not properly supervised by the ventrolateral prefrontal cortex (VLPFC, emotion control region), pushes the nucleus accumbens to excessively indulge towards seeking reward. The normal caution exercised by VLPFC and amygdala  in the emotion circuit may be impaired in case of the mood disorders and get the reward circuit into trouble. I know I simplified it, but it is as accurate as it can be with the research findings based on animal and human studies pooled together.

You can begin to now understand (1) where dopamine works, (2) how emotion regions are connected to reward regions that influence one another and, (3) this is optimal and useful to be motivated, (4) but can go haywire and become a hot mess if any regions are impaired in any of these circuits.

Podcast and a neuroscience journal article are in pipeline to explain all this even further! Feel free to ask me any questions. I love to help.

PS. Oh by the way, Paul Clarke our reader from England (Cassiobury Court-Addiction Center) contacted me to pass along his article about CBT for addiction here.